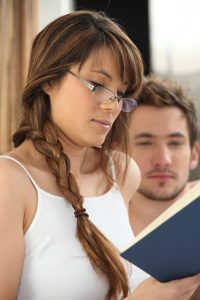 An e-Book Doesn’t Have to Be Scary to Keep You Awake!

You’ve probably heard the same warning I have…don’t look at digital screens right before bed if you want to go right to sleep. I believed it, but recently I saw some actual proof, in an article about a study by researchers at Harvard Medical School.

Basically, the study randomly assigned subjects to read from a regular paper-and-ink book or from an electronic reading device prior to going to bed. The subjects then, of course, were monitored to see what effect the difference might have on their success in getting a good night’s sleep. The results are – excuse the pun – a real wake-up call.

Among the findings, those who had read from an eReader or other digital screen took an average of ten minutes longer to fall asleep in the first place. That doesn’t seem like a lot, but if you’ve been in that situation, you understand the frustration it can cause, and how that restlessness can snowball into a problem; especially when you know you have to get up early for an important meeting, an airline flight or other commitment.

The actual impact on your night’s sleep lasts far longer than ten minutes. When darkness falls- around 9 p.m. – your body releases significant amounts of melatonin into your bloodstream. Melatonin makes you feel drowsy, and helps you fall asleep quickly.

In subjects who had read from an e-book, the release of that melatonin was delayed by about 90 minutes compared to the other group. In addition, the amount released in total was diminished by about 50%.

Simply put, the pineal gland, which controls the release of melatonin, is fooled by the artificial light from a screen, and thinks it is not bedtime time yet. It’s a chemical reality, and that 90-minute delay puts some definite speed bumps on the road to dreamland.

The study also confirms what earlier studies have shown – exposure to digital screens alters the timing and reduces the amount of REM (rapid eye movement) sleep the subject will experience during the night. That’s important since REM sleep is considered the most “restorative” part of the sleep cycle. It is thought that adequate REM sleep is critical to things like memory, creativity and brain development.

Indeed, what most of us would consider the benefits of a ‘good night’s sleep’ occur as a result of the 20% or so of our sleep cycle that is occupied by REM sleep. So any reduction in that percentage can easily impact not only how we perform the next day, but even over a longer period of time.

From the things I’ve learned thus far in researching and presenting our #MindfulTech series, it occurs to me that we may be caught up in a proverbial “perfect storm.”   We are pushed to be more productive. We are confronted with more and more things on digital screens. We are pressed, in many cases by our jobs, to use those digital screens more often each day, including during our personal hours and family time. In addition, many people, for supposed convenience or whatever reason, do their “fun” reading on digital screens via e-books and e-readers, sabotaging their own sleep in the process.

In short, we have less actual time to sleep and regenerate, and more  dependence on the digital screens that detract from the value of the sleep time we do have. Is it any coincidence, then, that we get less meaningful sleep, feel more tired as a result and perform less productively during the day?

Does this feel familiar to you? I think we all suffer from it to some degree, but I’d like to know if you consider it a problem worth solving. I hope you’ll get in touch so we can exchange some thoughts. If this feeling is as common as I think it is, it might be time to make some conscious decisions to do better. For starters, if you are going to read before bed, make it a real book. It will lead to a happier ending once you turn out the light.

How To Increase Sales