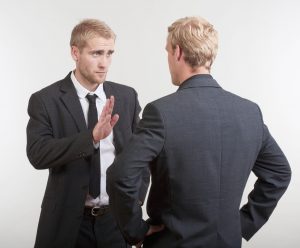 Working It Out At Work

Perhaps you’ve noticed that people come in all different types and some of those types can be pretty hard to get along with. Whether it’s in the grocery store or during rush hour on the highway there are people who seem to just have a chip on their shoulder or worse. But there’s one place where it’s especially hard to just ignore people who have a unique ability to get under your skin. That place? Your workplace. It can be a real challenge to spend eight hours or more per day with someone who just seems to “rub you the wrong way.”

This kind of situation can certainly have a negative impact on your attitude (and productivity) at work, but it can also spill over and affect your happiness outside the office. In order for us to THRIVE in 2015 and beyond, we have to find a way to deal with this. So I’ve decided to share a few general tips and suggestions I’ve put together from some of the reading I’ve done.

The frustration of dealing with a co-worker with whom you seem to have fundamental differences is naturally stressful. But are you sure that you don’t share at least some of the blame, or that anyone really deserves blame? Consider the possibility that you may just may have different personality types, different approaches to how you do your jobs and different philosophies in many life areas. Is the other person “difficult” because of a constant desire to talk about non-work issues, or a tendency to over-analyze a simple work task? Maybe you are a little quieter than average, or are more of a loner. Do others seem to have similar problems with the individual? If not…..

If you have problems dealing with a co-worker, one of the worst things you can do is discuss it with other employees. This, essentially, is gossip, and can make the situation even worse. Instead, try, in the most positive and professional way possible, to address the situation directly with the problem co-worker. Do not attack or accuse but simply let the person know how the behavior makes you feel. It is possible he or she never realized how uncomfortable it made you, or even that they were doing it at all. At the very least, a professional, serious, and non-emotional discussion can help establish boundaries and make the other person aware of how seriously you are taking it.

It’s a cliché, but it fits well here. In the step above, I suggested a professional discussion with the offending party. But even if that doesn’t go well, and even if the difficult co-worker becomes sarcastic or confrontational,  maintain your professional demeanor and conduct.  Make sure that your anger (even if it is somewhat understandable) doesn’t cause you to respond in kind. A juvenile battle of nasty comments certainly won’t solve anything, and will reduce you to the other person’s level in the minds of anyone nearby.

Yes, even the difficult co-worker. By continually presenting a positive attitude and a friendly greeting, you can disarm the negativity the problem co-worker brings to every encounter. This will also allow you to focus on the pleasant interactions you have with the great majority of co-workers. Seeing this example may help the difficult co-worker come around, but even if it doesn’t, it will make your dealings with that person a less important part of your workday. You will be saying, in effect, “life’s too short to spend it on negative people.”

Perhaps you may be a person who shies away from conflict or confrontation, and thus has a tendency to “tolerate” things. But ‘difficult” isn’t the word for a co-worker who in any way threatens, harasses, or “bullies” you. If any of those things are going on, don’t wait for something to change, or follow some of the “turn the other cheek” advice I mentioned ealier. No, in these situations, the time to act is immediately. NO job is worth the mental strain (and perhaps physical danger) that can result from this treatment to continue another day. In this case, don’t even bother raising the issue with the offender directly. Go to his boss, or to human resources, and tell all. This is a problem for the company to deal with, not you.

It’s Worth Clearing The Air for All Concerned

So from what I’ve found, it can take a lot to deal successfully with a difficult co-worker. It is likely to require some self-analysis, a great deal of patience, a large dose of behavior “modeling” and even, at times, courage. But when the air is cleared and the situation resolved (or at least exposed), it can be more than worth it for all concerned.

Have you ever experienced this type of situation, either involving you or someone in your company?  If so, I’d really love to hear more details about how the situation started, and how it was ultimately resolved. And if you have other suggestions to add to my list, please share them with us here. I’d be glad to update in a future post. Jobs can be difficult to find these days, and if we can manage to steer one person through a trying situation like this at their workplace, we accomplished something!

How to Be Happy at Work

Want a Better Workday? Kick These Time Wasters to The Curb